The owner of a Washington DC restaurant is reportedly taking Google to court over Google Maps listing errors that apparently caused him to lose business. Rene Bertagna, owner […] 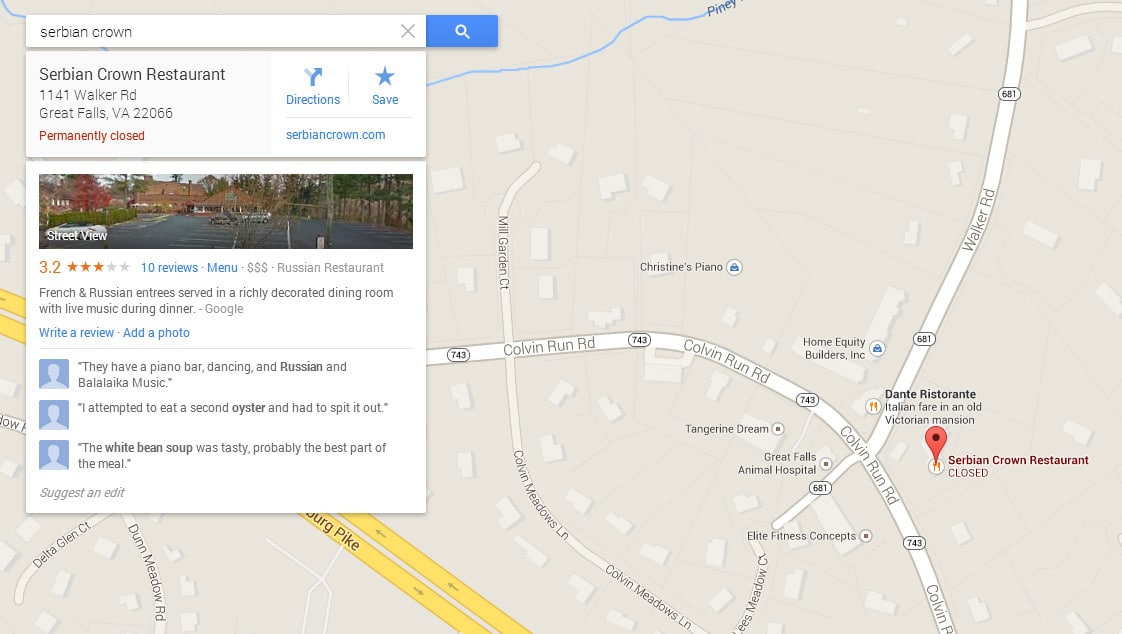 The owner of a Washington DC restaurant is reportedly taking Google to court over Google Maps listing errors that apparently caused him to lose business.

Rene Bertagna, owner and operator of the 40 year-old Serbian Crown Restaurant, claimed that the errors caused a 75% drop in customers on the weekend in 2012.

He was unaware of the errors - which stated the restaurant was closed over the weekend and on Monday - until it was pointed out to him by a customer.

Google is at fault according to Bertagna, because it failed to protect him from the malicious edits of others, potentially even from rival businesses.

Bertagna hired an SEO consultant, but it was apparently too late for the restaurant, which had to lay off staff and permanently close (see the screenshot of the current and now correct Google listing above).

This unfortunately shows how important it is for business owners to manage and maintain listings, not just on Google, but also Google+/Google Maps, Facebook, Twitter et al.

As well as watching out for thankfully fairly rare malicious edits, it is a good idea for business owners to make sure all details are up to date; to ask customers to leave reviews; as well as to update profiles with pictures, logos and fresh content.

In a separate note, Google has this week taken a lot of flack surrounding the right to be forgotten legal case, that forced the search engine to implement a new form allowing European users to request the removal of out content.

Google reinstated a selection of articles from news organisations such as the BBC and The Guardian.

However the search engine is duty to bound to continue to process requests from the public - so we don't see an end to this in the short-term.

The problems and hysteria could continue for some time, until someone from Brussels realises that they have unleashed something that is in our opinion potentially disastrous, and not unlike mass censorship.